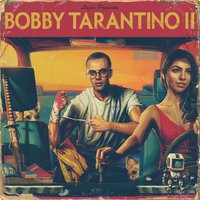 Logic is in comfort mode now. Coming off his first No. 1 album and top 10 single, he is running a victory lap with his new album titled "Bobby Tarantino II." On the intro, Rick and Morty couldn't have simplified it better: mixtape Logic is not spreading a message or trying to make the world a better place but more so bragging about how much money he is making or throwing stacks in the club.

And Bobby Tarantino is just that - a 13-track mixtape that sounds more like something the fans can look forward to hearing live on his next tour than a body of work he is putting out to silence critics.

The only flaw in this is arguably the only thing separating me from willingly hearing this album is the repetitiveness. As a fan, you now that Logic typically uses a lot of the same rhyme scheme throughout various songs, such as "homies, know me" on "State of Emergency" and "Indica Badu."

But, on this project, the autotune he used is what is really dragging him down.

Nevertheless, his flow is undeniable and it carries this until the wheels are about to fall off. The second track "Overnight" sets the tone, bending between stunting after striking fame and what is possibly the reasons why people downplay his career or the positive message that he preaches.

The Young Sinatra-assisted "BoomTrap Protocol" is one of the more interesting tracks simply because usually, he reflects about his rough upbringing as a variable to follow your dreams, but this time around, it is a clarification to why he will kidnap you if you bad mouth him.

Logic knows what he is capable of with his versatility and his sound to give a cohesive album. But, he was not here to do that. Instead, this is a playlist that I expect to hear ringing off in stadiums and any festival he is performing at this year. This mixtape definitely has its fair share of dead filler tracks scattered across the project, but within the rough lies a few gems that any Logic fan will find satisfying.